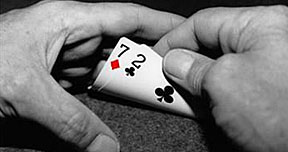 Bluffing isn’t only for poker players. As a freelance writer, you may find that every once in a while it will come in handy—but be prepared to fast-talk yourself out of a jam should you get caught. Generally speaking, bluffing is making someone think one thing when another or even the opposite is true.

As you start out in your writing career, you don’t have much going for you. You most likely haven’t published much or perhaps nothing at all. And trying to get something published seems to be an uphill battle. It’s a bit like trying to get a loan from your bank without any credit. And while you can’t bluff your way out of not having credit, you can stretch the truth somewhat about publishing.

For instance, let’s say you’ve had an opinion piece published in your local paper—if it still exists. You can list this accomplishment when querying an editor, just don’t say the piece was for the Op-Ed Page. Instead say you had an article published in such and such a paper. It will be difficult for an editor to track it down. But the credit still looks good and isn’t a lie. If you can get short pieces of 300 words or so published in print or on the Internet, that will help to bolster your professional image, especially if the idea you’re pitching is a really good one. What you’ve published and where you’ve published it won’t matter much.

The second bluff you can easily do is to make yourself look successful. Just as dressing for success can make a business career, so dressing your work can help start your writing career. Too many beginning writers think it’s just about the writing. There’s a lot more to it than that.

Start by designing a professional letterhead and perhaps even a simple, but professional looking Web page. Although you’ll most likely be conducting most of your correspondence electronically, you should make a good impression, nonetheless. Beyond correspondence, design your own invoice or get a free pre-formatted one from the Internet. Nothing says you’re professional more than a businesslike invoice.

Along with the above, its imperative to format your writing correctly. The writing biz has standards, and you should learn and follow them. Even if your writing isn’t that great, editors will more likely read it if it’s a good idea formatted as professionally as possible.

A third bluff that may come in handy sometime in your career, but especially in the beginning, is obtaining an interview from a prominent person or celebrity when you’re not writing for the top markets. In this case, it’s important to be honest with the person or their publicist. Don’t lie, but, on the other hand, don’t’ tell them everything.

For example, find out as much about the person as possible. Flattery will get you everywhere in this case. Make an appointment and have your questions prepared ahead of time. In fact, it’s a good idea to send them to the person or publicist in advance of the interview. As in the case above where you list credits that lead someone to believe they’re more than they are, you’ll need to do the same.  Or you can bluff your way into seeing the person.

When George P. Chapman of the Westerly Rhode Island Sun wanted to get an exclusive from Albert Einstein, he pulled a trick that got him past the impatient crew of big-time reporters waiting outside, straight into the genius's living room.

Though he was a reporter, he was also a telephone repairman. Wearing his lineman's boots and work clothes, carrying his tools, Chapman strolled casually to the door of Einstein's summer cottage. "I've come to look over your phone," he said.

The maid let him in, saying, "Good. The professor has been trying to get Washington, and the dial is slow." Chapman produced a can of oil and fixed the recalcitrant machine. Then he turned to Einstein and announced he was a reporter for the local paper. Could he have a statement? He got his scoop with a smile.

Bluffing has its place in freelance, but remember not to overdo it. Once you’ve established yourself, use your own knowledge and credits to build your career.
Posted by Bob Brooke at 8:50 AM

Thanks for the advice.