Getting Paid What’s Due 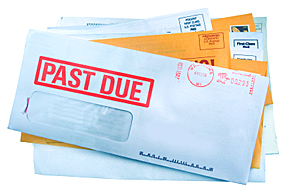 It’s hard enough working as a freelancer, but add to that the frustration of not getting paid on time or not at all and it can become a nightmare. For most writers, bill collecting is a time-consuming and distracting endeavor. But in today’s economy it has become a fact of life. Just as the people you owe come after you if you haven’t paid your bills, so should you go after those who owe you.

Often you’ll see the signs early on. An editor fights with you for a few more dollars payment. Or perhaps he or she doesn’t let you know up front that the publication will be paying up to two months after publication. If you notice clues like this, it’s better to back away from this market because you’ll surely have problems down the line. But many writers hesitate to do that or to hassle their editors about payment for fear of losing the work.

Also, make sure you state your terms of payment, unless otherwise arranged. It’s a good idea to ask an editor when the publication normally pays writers before you begin working for it. State on your invoice exactly how you want the check made out—John Doe or John Doe Communications, etc.

If you’ve incurred any expenses that you’ve previously discussed with the editor, include them on the invoice. Some editors ask that you bill them separately for expenses. Enclose copies of receipts if your editor requires them. If you’re sending your invoice by Email, scan your receipts and send image files of them. If sending by regular mail, send paper copies. If you invoice correctly and keep good records, you’ll find you can prevent problems from arising. Remember to keep copies of all your invoices. Mark those paid when you’re paid and keep an eye on those not paid as yet.

If you haven’t received payment when you expected it from an editor, send a pleasant Email reminder. Jog the editor's memory if a few weeks have gone by without payment. Editors get busy and many are  overworked and understaffed. Your invoice may have gotten misplaced. If you receive no answer within 10 days after this reminder, however, the editor may be ignoring you.

A firmer letter, sent by regular mail, should remind the editor that you met your obligations and you request that he meet his or hers. If you receive no response from this, then call the editor on the phone to find out what’s going on.

If none of these tactics work, then you can resort to charging interest on unpaid accounts over 30, 60, or 90 days, just as you’re charged if you're delinquent in paying your bills. While you may not receive the additional amounts, you'll get a businesslike message across.

If all else fails, you can always take the publication to small claims court. Depending on how much you’re owed, this can be more of a hassle for you than just admitting defeat and claiming the unpaid amount on your income tax. If an editor contacts you and tells you that the publication is having problems, back off a bit, but not too much. After all, you deserve to be paid for what you have done.

Generally, slow-paying markets don’t pay expenses. If you’re having problems collecting payment for the writing you’ve done for them, chances are they’re too strapped or cheap to pay for expenses.