Don’t Put Off Until Tomorrow What You Can Do Today 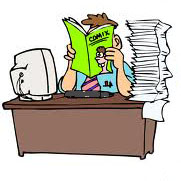 Everyone suffers from occasional bouts of procrastination. The subject is so popular that over 600 books have been written about it. But for many writers, this happens more often than for others. Why? And what can you do about it?

According to its psychological definition, procrastination refers to the act of replacing high-priority tasks with those of lower priority, especially if the lower priority ones provide enjoyment. Writing can be stressful at times. Deadlines can loom overhead like giant alien spaceships. Generally, those lower priority tasks are things that you can do later or perhaps not at all.

Behind most procrastination problems lies abulia, the abnormal lack of the ability to act or make decisions. And there’s no mistake that it’s a force you need to conquer. Knowing when, how, and why you’re procrastinating is the first step toward improvement.

Just because you procrastinate doesn’t mean that you don’t have the motivation or willpower to complete a writing project. Perhaps the project is too big or maybe your skills aren’t developed enough to handle it. While you may be motivated to write a particular book, for example, you may not have the resources or knowledge to do so. This leads to putting it off as long as possible. Simply trying harder won’t do it. You must understand what triggered you to procrastinate in the first place.

One of the biggest triggers for writers is the fear of rejection. Every writer, from novice to experienced professional harbors this fear at some time or another. Too prevent the fear of rejection from overwhelming you, the best thing to do is have several projects going at once. If one fails, you’ve got the others as backup. And who knows, the rejection of one you had hopes for may cause you to put more effort into another which may go on to be a bestseller. Let’s face it. Not all writing projects are meant to be successful.

Other things that may cause you to procrastinate are distractions from your environment. Is your office cluttered with papers that need to be filed? Does your house need cleaning? Does your garden call out to you to be tended? All of these can keep you away from your work. To make sure you don’t spend all your time on them, schedule each for specific times during the week. By doing a little each day of any of your chores, you’ll not only get them done but get your writing done, too.

Procrastination isn’t a harmless little hang-up. Don't reward it. Sure, you need to take breaks once in a while, but don’t take time to drink too many extra cups of coffee.

To conquer procrastination, define the stumbling blocks in your path. Then tackle them one at a time. Pick one specific area where procrastination plagues you and conquer it. By becoming aware of the problem, you’re half way to solving it.

Learn to set priorities, then focus on one problem at a time (See my blog on priorities from two weeks ago.) If you try to tackle all your problems at once, you won’t get anywhere. Set a goal to take care of the most severe one first.

Give yourself deadlines. Many writers work best when on deadline. The added stress of knowing a project is due by a certain date makes them work harder. But when they don’t have a deadline, they find other more enjoyable things to do.

Don't duck the most difficult projects. Work on them but perhaps not as long as some of your others. By doing a particularly hard writing project a little at a time, it tends to make it seem easier. Another way of tackling this problem is to begin with an easier project, then switch to a hard one, followed by an easier one. Giving yourself a break between difficult projects makes doing them less stressful.

Don't let perfectionism paralyze you. Too many writers are perfectionists. Some continue to do edits and rewrites until they lose sight of the project as a whole. Know when to stop. Perhaps give yourself a limit on rewrites. Continually rewriting can sometimes make what would have been a good project a mediocre one.

To paraphrase an old saying, “If you can't beat procrastination, make use of it.” Perhaps the fact that you’re procrastinating about a project means that your subconscious is holding you back from something you’re not yet ready to do. This "something" may be only a segment of an article or short story for which you’ve written a good beginning, or it may be the approach to a better-paying market.

Don’t neglect that little voice inside you that’s saying "not yet." You just may not be ready.

You make good use of procrastination when—and only when—you’re able to find a better way to accomplish what you avoided by procrastinating. It can be a blessing in disguise, but it won't be unless you make it so.