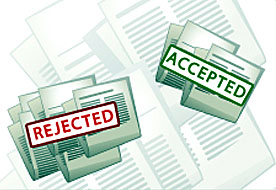 Once taboo, multiple submission has become a fairly common practice in publishing today, especially in this economy, for certain types of articles, for some book proposals, and for finished book manuscripts. But if you want to try this method of marketing your work, you need to do it with caution. Usually, editors will accept a multiple submission if they know that others are receiving the same material at the same time. So it pays to be honest and aboveboard.

If you’re new to publishing, you may assume that the quickest and best way to reach potential customers is to send your article, short story, or book proposal out to as many editors as possible, hoping someone will pick it up for publication. While this may seem logical and works in other fields, this sales blitz technique doesn’t always work in publishing.

First, you may get positive replies from all of the editors at the same time. Unless they’re in non-competing markets, there’s no way all of them can publish your work at the same time. In once instance, a writer sent out an article to several publications. One editor replied and said he wanted to publish it. So the writer agreed. He didn’t hear from any of the other editors, so the writer assumed that none of them wanted it. A month later, he received an Email from one of the other editors, saying that she had published the writer’s article in the current issue of her magazine. The editor who had said he would publish the article did so in that same month. When he realized that the article has appeared in a competing publication, he was livid and told the writer he would never publish his pieces again. This sad story has a silver lining, however. As it turned out, the editor, who failed to inform the writer that she was going to publish his article, paid five times as much as the first one who did. The writer went on to become a regular contributor to the higher paying publication. But this isn’t usually the way the story ends.

Normally, when magazine editors find out that a writer is sending out multiple submissions, they blacklist that writer and make it impossible for him or her to sell to periodicals in that market. So when sending out articles or short stories to magazines in competing markets, you need to be extra cautious.

Only send a submission to more than one magazine editor if that publication is in a non-competing market. So before you decide to do this, compile a list of non-competing markets that may be interested in your piece. What defines a market is its demographic focus. So only send the article to one magazine aimed at seniors, one at small business owners, one to women, one to men, and so on. Markets are also defined by the subject matter of the periodical, such as travel, antiques, teens, finance, etc. And never, never send multiple submissions to the editors of top-paying magazines. That’s a sure-fire way of never getting published again. Remember, multiple submission works best with sales of one-time rights to non-competing markets, as with spin-offs (See last week’s blog.)

On the other hand, book writers routinely submit multiple book proposals to half a dozen editors at a time. While some magazine editors take their time replying to unsolicited submissions, most reply in a reasonable amount of time, especially with today’s Email. Book publishers, however, are notoriously slow.

As far as books are concerned, multiple submissions are simply good merchandising. You send out a partial book or proposal to a publisher, and you may have to wait up to two months for them to say no. If you received a two-month turn-around from six different publishers, one at a time, with your original, it would take you a year to cover all six. By sending out six partials or proposals at once you can cover the same publishers in two months, and get your product to 18 publishers in only six months. This is especially important if you have a subject that’s tied in with the news. Within a year or even less, the book idea might be so out of date it wouldn’t be worth publishing.

When agents offer book material to several editors at once, they tell them that they’re considering other offers. They don't, as a rule, use the term multiple submission since some editors still resent the idea. Other terms, such as "We're exploring this idea with several publications," seem to be more acceptable.