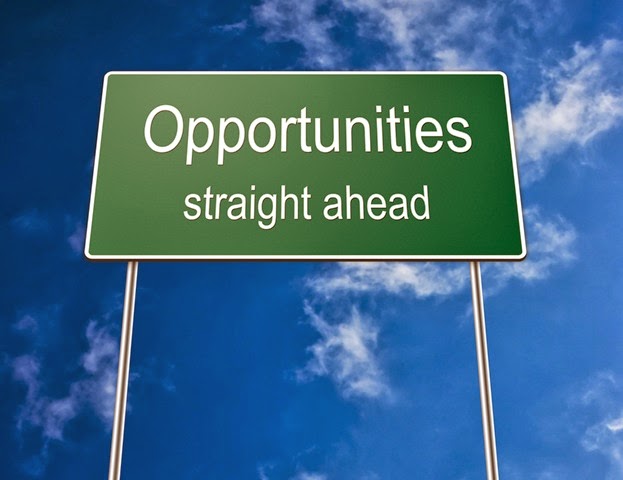 As a writer you have to recognize when opportunity comes a knocking. And to take advantage of publishing opportunities, you have to be prepared.

One way to be prepared is to increase your knowledge about a subject in which you're interested. With more in-depth knowledge you’ll be able to gain insight into situations that you may choose to write about. Plus, in-depth knowledge usually leads to details that you wouldn’t have learned about earlier. These will make your writing unique and interesting, as well as open up further writing opportunities.

Opportunity may come from something a friend tells you, or perhaps you’ll overhear something while eating in a restaurant. Normally, you might not consider either important. But with a little background knowledge, you may pay closer attention to these suggestions. Avoid thinking negatively. Instead, ask yourself, “What if?”

You might feel an impulse to do something new. While routine is a good thing, it can lead to complacency. Trying a new sport, a new route for your daily walk, even reading a new type of book will alter your brain patterns enough to make you think of new ideas.

Too many writers stick with one type of subject matter or writing genre. Sometimes it helps to not only read material from another genre but to try writing it as well. This is especially useful when combating writer’s block. Getting away from your regular work can be a good thing.

Get out and experience life. You don’t have to climb mountains or ride the rapids. You may find a new outlook and new material by just going to a different supermarket. Armistead Maupin started going to a Safeway Market on Thursday evenings. He went there to buy groceries and because it was single’s night at the market. He discovered a whole side of life that he didn’t know existed and started writing about it in his column in the San Francisco Chronicle. Eventually, that turned into three novels and went on to become a hit TV mini-series, "Tales of the City." Now that was a profitable opportunity.

But if you choose to be more adventurous, make sure your body is in good enough shape to handle the extra workout. Who knows. You may just have a life-changing experience. For example, one writer started out on a week-long horse-trekking expedition in the far reaches of Yellowstone National Park. At first it seemed like any other trail ride, albeit longer and more strenuous. But as the trek climbed higher and higher, the challenges got greater and greater. Sides of those on the trek that had remained hidden began to appear. And it wasn’t their good sides. How that trek changed not only the writer but the people he traveled with became material for future articles. One that he never would have thought to write before the trek—an article on the horrendous impact of the 1988 Yellowstone wildfires—came about because he rode through the area and saw what devastation it had caused. Another article looked into what to look for in an outfitter due to problems with the one used on the trek.

And don’t forget marketing opportunities. Keeping abreast of the publishing industry will help you to recognize when certain subjects become popular or vice versa. Some writers only focus on what they’re writing, not whether there’s a market for it.

Perhaps you’ve been writing about a particular subject for a while but can’t seem to get published.  That could be because no one was interested in it at the time. But then something happens and the media is all over it. Take the situation with Russia and the Crimea for example. Has this sort of thing ever happened before? Remember the Crimean War from history class. You probably weren’t listening that day. Or Hitler’s takeover of Poland in World War II.

So if you can, take a hint from Mastercard, paraphrasing its slogan, and “Master the opportunities.”