The Power of Cause and Effect 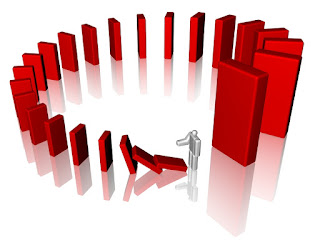 Cause and effect is the most powerful tool you can use as both a writer of creative non-fiction or fiction. While in the former fact dictates what happens next because it actually happened, in the latter it’s up to you, the writer, to figure out what happens next.

One of the best places to see the bad side of cause and effect is on T.V. Here, writers face a number of challenges—time restrictions, actor availability, and budget. One of the classic snafues of cause and effect was in the primetime drama “Dallas.” Patrick Duffy gets killed off when a problem arises with his contract and then miraculously comes back to life after it’s settled by saying he dreamed it all. T.V. writers are notorious for killing off characters who have contract disputes.

You can see one of the worst uses of cause and effect in the sci-fi drama “Stargate Universe.” Unlike it’s parent series, “Stargate SG-1,” which told its story in a smooth flowing way, this series jumps around so much that it becomes hard to follow as the episodes unfold. Add to that the lack of plausibility of some of the events, and you end up with a mishmash of comings and goings that even a diehard novel reader would find hard to endure.

Everything in a story must be caused by the action or event that precedes it. That’s a fact. If you start playing with flashbacks and flash forwards, you better make damn sure that what you write is clear to the reader. And while that seems like an obvious statement, you’d be surprised how paying closer attention to cause and effect can improve your writing.

Whether you pursue creative non-fiction or fiction, your main goal should be to ensure that your reader is always emotionally present in the story—that is, you want them to empathize with your main character throughout. But when you force readers to guess why something happened or didn’t happen, even for just a split second, it causes them to intellectually disengage and distances them from the story. Rather than remaining present alongside the characters, they’ll begin to analyze or question the progression of the plot. In the process, they lose their place in the progression of things. This is exactly what happens in all episodes of Stargate Universe. .

When a reader tells you that he or she couldn’t put a book down, usually it’s because everything in the story followed logically. Stories that move forward naturally, cause to effect, keep the reader engrossed and flipping pages. If you fail to do this, it can confuse readers, kill the pace and show your weaknesses as a writer.

Let’s say you’re writing a short story in which the bad guy is chasing your lead character.

Fumbling with the latch, he managed to lock the door because he knew the killer  would soon be on the other side.

Writing is that way, you’d break the reader’s emotional engagement with the story.

Instead, you should reverse the sentence so it reads like this:

He knew the killer would soon be on the other side of the door, so he fumbled with the latch and finally locked it.

If you find that one sentence is serving to explain what happened in the sentence that preceded it, you can usually improve the writing by reversing the order so that you render rather than explain the action.

In more complex scenes, realizations and discoveries usually happen after actions, not before them. Always build on what has been said or done, rather than laying the foundation after you’ve built the idea. Continually move the story forward, rather than forcing yourself to flip backward to give the reason something occurred.

One way of making sure things don’t go awry in complex scenes is to list each event in the order that it’s supposed to happen. By creating this visual guide, you’re more likely to stay on track. This is especially useful in flashbacks and flash forwards.

However, there are three exceptions to this rule—three times when you can move from effect to cause without shattering the spell of your story.

The first occurs in scene or chapter breaks. Here, you can begin with a vague reference in dialogue that you can follow up as the scene unfolds. The reader will immediately be curious as to what’s happening and will want to continue reading to find out what happens.

The second exception occurs when one action causes two or more simultaneous reactions. Your character might sigh and look out the window, the order of which could go either way.

The final exception happens when your character deduces something the reader hasn’t yet concluded. Imagine Sherlock Holmes staring at the back of an envelope, cleaning out a drainpipe, and brushing off a nearby stick of wood, after which he announces that he’s solved the case. The reader asks, “How did he do that?” This peaks the reader’s  curiosity, and later when the character explains his deductive reasoning, the reader sees that everything followed logically from the preceding events.

If the writers took the time to make any of the above happen in the episodes of "Stargate Universe," the story wouldn’t have been so confusing. This is especially important when writing science fiction, which, in itself, can be confusing enough, particularly when the writer creates whole new worlds.
Posted by Bob Brooke at 1:54 PM