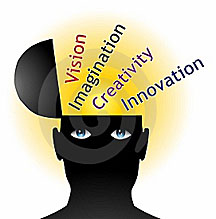 Many writers don’t think before they write—at least not creatively. Because of this, they get mired in the mess of words that sometimes pours out of their heads without any idea of where they’re going with them.

Part of the reason for this goes back to school. While some teachers encourage creative thinking, most don’t. They’re under pressure to cover all the material in the curriculum for their course in a specified time, and in many cases that doesn’t leave room to get creative.

A young, enthusiastic English teacher, who also was an actor in her off hours, got very creative in teaching Shakespeare. The head of the English department admonished her for doing so and not sticking to the curriculum for her course. Needless to say, the teacher took it until the end of the year, then she quit. Her students really got into Shakespeare, but according to the old biddy who headed up the department, that wasn’t the way to do it.

Many beginning writers believe if they just sit in front of their computer that the right words will pour out. They think this way because in school they often had to write in class with little time to properly think out what they were doing. While this type of spontaneous writing may work part of the time, usually when it does, it’s a “happy accident”—a fine creation that usually can’t be duplicated because the writer doesn’t know how they did it in the first place. The trick is to figure out how to creatively solve a writing problem, so the procedure can be repeated. Stephen King has authored lots of books. Once he figured out how to make his first one a success, all he had to do was creatively think of other plots that he could use. By making them twist and turn, he came up with a mass of work.

When beginning a writing project, it’s important to sit and think about it from several different angles. Look at all the possibilities. Mull it over. One of those possibilities might be out in left field, but it just may turn out to be the best solution. Jot down every alternative that seems like it might work.

As a freelance writer, you need to also think creatively at every opportunity, not just to write creatively but to operate your business that way. Once you start thinking creatively, you’ll find that it eventually becomes second nature. Life, itself, is a puzzle, but freelance writing is an even bigger one.

With brighter, more creative ideas than your competition, you can move forward quickly in freelancing. Never accept what looks like a closed door. Move in closer and give it a shove. You may discover it was simply an optical illusion.