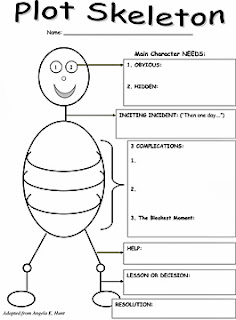 In a video interview on YouTube, Stephen King recently told a group of students, “Forget plotting. That takes all the fun out of writing.” That may be easy for him to say. As a famous writer of over 35 books and numerous short stories, plotting is second nature. But to most beginning writers, plotting fiction and blocking non-fiction is a fact of life. A necessary evil that they need to master.

The more you write, the easier it becomes. Just as any other professional, writers develop skills that become part of the routine. While Stephen King may think he’s just winging it, he’s actually plotting out his stories in his mind. He doesn’t need to plan them on paper, but you do.

Whether you’re writing articles or short stories, non-fiction books or novels, you need to know where you’re going—you need to know how it will generally will end—so that you can finally get there. Too many beginning writers start a book and only get a third to half way through before they call it quits. The article, short story, book, or novel won’t guide you. Only you can do that.

The reason most beginning writers shy away from blocking or plotting is that they associate these with outlining—that dreaded chore they had to do in school for their term papers and such. Neither is outlining.

Let’s take blocking, for instance. Blocking out an article is easy. You start by putting the word “beginning” at the top of the page and the word “ending” at the bottom of the page. In between you list what comes in the middle in whatever order you choose. This is simplifying this a bit, but, nevertheless, it’s as simple as that. You don’t have to write each step out in sentences, just make notes to yourself as to what it will contain. You may also may want to make a note as to how you plan to start your piece and how you’ll end it since endings usually wrap up where you began. You can do all of this on a napkin if you want. This isn’t a formal outline, but a flexible plan that may change as you write. But it’s a plan all the same.

Plotting a short story is similar. There are some basic plots for all short stories. So after you choose which basic plot you’ll be following, you need to write a synopsis of your story. Pretend a friend asked you what your story is going to be about, then just tell him or her, but do it on paper and limit it to one page. This will help you plot out your story. Again it’s a flexible plan. It can change as you go, but by doing this, you’ll have an idea how the story will end. So you write forwards towards that ending.

Writing isn’t easy. Anyone who tells you that or gives you that impression is only telling you what you want to hear. Writing is work—hard work. But the more you do it, the easier it becomes. Once you start blocking or plotting, you’ll wonder why you didn’t do it sooner. Yes, writing can be fun, but if you’re stressed out trying to write something, there’s no way it can be.
Posted by Bob Brooke at 8:29 AM