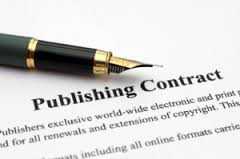 Okay, you’ve decided that you just can’t be successful as a writer unless you have a literary agent representing you. You’ve found one, but just because you're excited someone wants to represent you doesn't mean you should let them take advantage of you. You still must watch out for your own interests. Not all agents are as professional as they should be. Before you sign on the dotted line, be sure to follow these tips while you’re negotiating your contract.

First, find a reputable agent. You’re first thought is: Aren’t all agents reputable. The simple answer is no. Reputable agents generally don’t require payments of any kind when you sign a contract with them for their services. They also don’t charge fees to read your work. And they don’t sell your work to vanity presses. But most importantly, they’ll readily share with you the names of other authors and projects they’ve represented.

Reputable agents don’t charge excessive commissions. Today, the standard is 15 percent for book sales, although you could pay up to 20–25 percent for foreign sales, and 10–20 percent for movie, TV and theatrical sales.

Most reputable agents won’t try to cash in on your speaking fees—they really aren’t entitled to, unless they were directly responsible for getting you the engagement.

Control your agent-related expenses. Ideally your agent won’t charge you for making one or two copies or standard postage, but only for unusual expenses, such as large numbers of copies and priority mail, express or courier services. You agent should work within spending limits that you set and not spend anything over a fixed amount, say $100–$250, without your approval.

Some agents demand that publishers pay them your entire book advance directly, then they’ll send you your share. In most cases, a publisher will send you your 85 percent and the rest to your agent to cover your commission fee. The first incidence can pose a risk. If your agent gets paid your entire advance and then goes bankrupt, you’ll get nothing. Insist that your publisher pay you the entire advance directly, then you pay your agent.

Although most publishers still report and pay royalties semi-annually, typically within three months after the semi-annual period ends—the check for the royalty for a book sold in January will be paid in late September. If your agent insists on receiving all monies owed to you by the publisher, he or she should pay you promptly upon receiving the funds—ideally within 10 days, but no longer than 30.

Above all, you should expect your agent to be honest in their dealings with you., but don’t take that for granted.
Posted by Bob Brooke at 2:11 PM