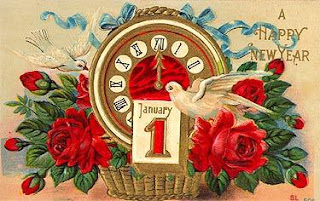 Happy New Year! Yes, folks, it’s time to start over again. Funny how this one day can make such a difference. Personally, I try to use this day to get myself and my business reorganized for the coming year.  As the year rolls on, things seem to unravel. My recordkeeping seems to go awry. My thoughts about writing seem to get more vague, the direction for my business seems to wander.  And I suppose I can thank the Romans, specifically Julius Caesar, for making New Year’s Day such an auspicious occasion. This year, like the year 2000, is even more special because it's the start of a new decade--or is it?

Originally, the Romans numbered years ab urbe condita (a.u.c.), that is, "from the founding of the city" of Rome. Had this early Roman calendar remained in use, January 14, 2010 would have been New Year's Day in the year 2763 a.u.c.

Following his conquest of Egypt in 48 B.C.–now known as B.C.E. (Before the Common Era)–Julius Caesar consulted the Alexandrian astronomer Sosigenes about calendar reform since the a.u.c. calendar didn’t meet the needs of the emerging empire. The calendar which Caesar adopted in the year 709 a.u.c.–now 46 B.C.E (Common Era)– was identical to the Alexandrian Aristarchus' calendar of 239 B.C., which consisted of a 12-month year of 365 days with an extra day every fourth year.

The Roman date-keepers initially misunderstood Caesar's instructions and erroneously held every third year, rather than every fourth year, to be a leap year.  After some dispute, Augustus Caesar (Julius Caesar's successor) suspended leap years, reinstating them with the leap year of 4 C.E.

Another source of uncertainty regarding exact dating of days at this time derives from changes made by Augustus to the lengths of the months. According to some accounts, originally the month of February had 29 days and in leap years 30 days. February lost a day because at some point the fifth and six months of the old Roman calendar were renamed as Julius and Augustus respectively, in honor of them, and the number of days in August, previously 30, now became 31–the same as July–so that Augustus Caesar wouldn’t be regarded as inferior to Julius Caesar. The extra day needed for August was taken from the end of February.

However, there’s still no certainty regarding this, so all dates prior to C.E. 4, when the Julian Calendar finally stabilized, are uncertain.

The Roman abbot Dionysius Exiguus instituted the system of numbering years A.D.–short for "Anni Domini Nostri Jesu Christi"–in 527 A.D. He figured that the Incarnation had occurred on March 25, 754 a.u.c., with the birth of Jesus occurring nine months later. Thus, he designated the year 754 a.u.c. as the year 1 C.E.

There’s a question whether the first Christian millennium should be counted from 1 C.E. or from the year preceding it. According to Dionysius, the Incarnation occurred on March 25th of the year preceding 1 C.E.., with the birth of Jesus occurring nine months later on December 25th.  Therefore, it’s reasonable to regard that year, rather than 1 C.E. as the first year of the Christian Era. In that case, 1 C.E. is the second year, 999 A.D. is the 1000th year, and 1999 C.E. is the final year of the second Common millennium, making 2000 C.E. the first year of the third millenium. So, by this theory, all those who celebrated the new millennium on December 31, 1999, had the right year. Therefore, 2010 is, indeed, the beginning of a new decade.
Posted by Bob Brooke at 12:37 PM

Fascinating... I never knew that was the reason July and August had the same number of days. Just goes to show that you DO learn something new every day...