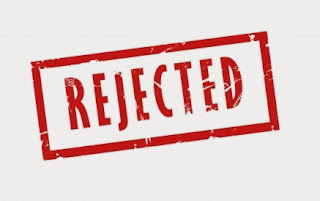 Most beginning writers think that rejection is a part of the writing process. They get rejected so often that they become dejected and some lose all hope of getting published. It doesn’t have to be that way.

So let’s take a look at why your work may be rejected.

You could use the wrong format (more on formatting in a later blog)—how the writing looks on the page. You could have written about a topic the publication doesn’t like or use. You could have sent your piece in at the wrong time if it’s something more appropriate for a particular season. You could have made lots of mechanical errors—spelling, punctuation, etc. The list can go on and on.

So you see that most of the fault in rejection begins with you. But most beginning writers put the blame on editors or others involved in the publishing process. So what are some ways of dealing with rejection?

Don't take it personally. If you’re a beginning writer, editors won’t know you. You haven’t proven yourself, so why should they take a chance on you. If you don’t cross all your “t’s” and dot all the “i’s,” then you're surely asking to be rejected. Your work has to be perfect and look professional, even if it doesn’t sound professional. A good piece of writing can be edited into a very good piece, but a bad piece usually isn’t salvageable.

Get a second opinion. If you think that your work should have been accepted, or if it’s been rejected by a few editors, perhaps you should seek a second opinion. Get someone you trust that’s also a writer to take a look at it and offer their opinion. You may find that your writing wasn’t that good after all.

Discover what you can do to regain your confidence after a series of "no's." For a new writer, rejection really hits hard. Perhaps you’ve received enough rejection slips to paper the walls of your bathroom. Then maybe you should do just that. A little whimsy never hurt anyone. But seriously, write something that’s short and good and send it to an easy market—one that publishes a lot of material. One of the biggest mistakes beginning writers make is sending their work to top markets when their skills are not yet up to speed. And many of those markets buy only a few pieces per month, so competition is fierce.

Find a way to turn your rejection into acceptances or positive experiences. What you need is feedback, and that’s something most editors just don’t have time to give. Read rejection notices carefully to see if there’s even a hint of feedback in them. There are editors out there who want you to succeed. You need to know what they want and then you need to give it to them.

Be creative while waiting. Too many beginning writers send off a piece of their work and then sit back and wait for an answer. Begin work on another piece while you're waiting. As far as you're concerned, the fate of your first piece is out of your hands anyway. Also, don’t wait for months for a reply. If you haven’t received a reply in say two or three weeks—a month at most—drop the editor a note asking if he or she has had time to consider your piece. Don’t be afraid of editors. Remember, they’re busy people, but people just the same.

Above all, keep slugging away. Don’t give up. Eventually, something you’ve written will get published. But you have to guide it along the right path to get there.
Posted by Bob Brooke at 8:38 AM