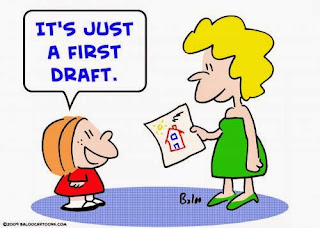 First drafts are the all-important backbone of any article, short-story, or book. But many writers produce them as if they’re the final draft. There’s a great difference between the two.  And there’s a difference between a first draft in non-fiction and one in fiction.

In non-fiction, you begin with a mass of facts and have to compile them into a cohesive article or book that documents reality. But in fiction, you start out with nothing and have to create an illusion of reality. In both cases, a first draft gives you something to work with.

But even before you get to the first draft stage in your writing, you need to think about what you’re going to write. You’d be surprised just how many beginning writers don’t do this. This comes from bad practices they learned in school. Much of the writing they did was spontaneous writing in class. The teacher would give them an exercise, and they had to start it or even complete it in class. Too many carried this method over to their own writing.

In fact, you should begin by thoroughly thinking out your idea and how you plan to craft it. Then you need to block out what you plan to write. This isn’t an outline but a plan—and a loose one at that. You shouldn’t include too many details in your blocking but, instead, focus on the main and some of the subpoints. The main thing is to keep it flexible. Your blocked plan will help you to stay on course. In non-fiction, it will help you line up the facts in a logical order. In fiction, it will keep you from going down too many side paths and thus drifting away from your plot.

Think of your first draft as the clay, not the sculpture. A potter starts with a hunk of wet clay and kneads it into a pliable mass. At that point, he or she only has a vague idea of what the final piece will look like. And just like this mass of clay, your first draft will be messy and unrefined. But refining comes later. Your job now is just to get started.

So the first thing to do is to empty your head of everything on the subject at hand. In non-fiction, you most likely will have notes to refer to but in fiction, you may just create as you go. In both cases, you have your blocked plan to follow. Don worry about how your writing looks or sounds at this point. This is just between you and your  keyboard.

Today, both non-fiction and fiction writers do lots of research. But that can bog you down.  You may get so involved in your research that you never get to your first draft. Also, know when you’ve done enough general research on your idea. If you start writing and then continue your research, you’ll constantly be changing what you’ve written. It’s okay to look up details.

If you’re writing fiction, you can always flub the details and make them up to keep the story going. To make sure you know which details to look up later,  put them in bold type. This will make them stand out. If you’re writing an historical article or fictional story, put the year dates in bold type. Then you’ll be able to see at a glance if they’re out of chronological order. The only time they may not be is if you’re using a flashback.

Finally, set a deadline for your first draft. Be reasonable. Give yourself plenty of time to write it, but know when it should be finished so that you can get on with revising in future drafts. If you stop for any reason for a bit of time, insert “START HERE” in your notes or if you’re in a revision draft, wherever you stop within it.

The key to writing a successful first draft is not to revise as you go. Keep revising until after you have the whole story laid out, and you’ve gained some perspective on it. When you’ve finished your first draft, let it rest. Work or another project or do something else for a bit. That way, when you do get back to it, you’ll be able to see just what needs to be done.