Dreams of an Indie Author 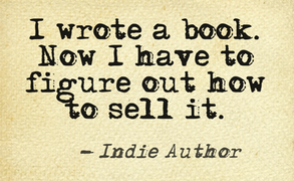 With the advent of digital book publishing, many beginning writers think that all they have to do is write a book and readers will rush to Amazon to buy it. Today’s indie (independent) authors have realized the sad fact that books don’t sell themselves.

Even when writers relied on print book publishers to get their books to market, the percentage of those who earned enough from royalties to make a living at book writing was relatively low. True, though royalty percentages have increased from lows of 8-10 percent of a book’s price—sometimes the net price (the amount paid by wholesalers)— to 50 percent for ebooks, the chances that they would have earned their advances were slim. While bestselling authors can make a killing—for example the author of the Harry Potter books—most only scrape by.

When writers had books published by big-name publishers, they assumed that their publisher would help promote their books. In recent years, publishers promoted most books less and less, leaving that up to the authors. Indie authors, on the other hand, must not only write their books, but promote them as well. Some spend twice as much time on promoting their books as they did writing them.

Before getting depressed and deciding not to write that book you’ve been planning, let’s take a moment to look at what you need to do to make it a success.

If you’re writing a memoir, don’t assume your story is of any interest to anyone but yourself, your family and your friends. Unless you are an A-list celebrity or have done something truly extraordinary that makes a stranger’s jaw drop, readers won’t buy your book.

Be sure to have someone else edit your book. Editing a book is an important part of the process, but it’s not something you can or should do. An editor sees your book with fresh eyes, not only to pinpoint grammatical problems but also problems with content and order. Find a someone who edits books rather then giving it to a friend to look over.

Start promoting on social media at least six months before you plan to launch your book. You’ll need to spend several hours each day on social media interacting with fans, building rapport by providing interesting content. Tease them with short excerpts and little-known facts about your subject. Above all, learn all you can about marketing and promotion.

Avoid writing about trending subjects. While it’s great to write about a subject that’s trending on social media, by the time you actually get your book finished, it probably won’t be trending anymore.

Don’t plan on earning a living from indie writing anytime soon. Print publishers are paying out shrinking advances, and many are only purchasing one book a year from each writer. Agents take 15 percent of that and the IRS takes 20-30 percent. What you’re left with isn’t much. In fact, indie writers without some additional sources of income will find making a living a challenge.