If at First You Don't Succeed 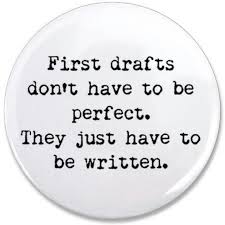 For most writers, writing a first draft of an article, short story, or book is still a lot better than going to the dentist. For some, cleaning the bathroom or folding the laundry is a lot less stressful. With a first draft you'll start from nothing and creating something, but not the finished product.

Before writing the first draft of any piece of writing, it pays to block out your idea. It makes writing an article or short story a lot simpler. But just because you block out the structure of your piece of writing, that doesn’t mean you have to stick to it religiously. Blocking helps you to think through some questions before you begin writing. If you’re writing fiction, the story, itself, can take an unexpected turn. That can change everything. Sometimes, it’s a dead end, and you’ll have your blocking to fall back on.

Think of your first draft as the clay, not the sculpture. You start out with a hunk of clay that you mold over and over. Much of it will be messy and unrefined. But don’t worry about that now. Your job is simply to get from the beginning to the end. Put down everything that comes into your head. Don’t worry about grammar. You’ll be able to correct any problems later. For now, get everything out.

Don’t stop to do research.  Depending on the type of writing you do, completing all your research before you start may be necessary, such as in writing an article. But if you’re writing a piece of fiction or even a book, it may be better to do some basic research—just enough to get you started—rather than doing all of it. Instead, you can insert words in uppercase letters in your first drafts to indicate where details need to be filled in later.

Set a deadline. It pays to set a deadline for your first draft. Otherwise you may be writing it for much longer than you planned. You really can't move on until you complete your first draft. And without anyone to prod you, you may not even get your first draft finished. Don’t start your next draft as soon as you finish your first one. Give it some time to rest. In the meantime, do some work on another project. When you come back to it, you’ll see the problems immediately.